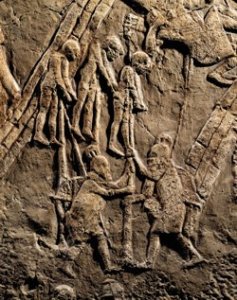 “Love your enemies”…is a basic in principled Christ-following. But I do not love all of mine!

IS stands for today’s “Islamic State.” In its current efforts to take over Iraq and Syria they are known as ISIS. The most expansive IS is ISIL… “radical” Muslims devoted in their goal to take over all of the Middle East, and the entire world! All vile murderers, these Islamists are in alliance with their god Satan…and these I do not love!

In fact, I have advocated “letting them go”…to death and Hell…letting them kill each other, and die off the face of this earth!

I cannot find enough enfatic-punctuation to express my current personal hatred for these terror-filled Muslims! This conviction only increased last week with the cruel beheading of American journalist Jim Foley.

The biblical Jonah hated these same people. The Ninevites were an ancient vile, cruel, God-hating people. When God sent the prophet to warn of His impending judgement and offer of salvation, Jonah refused, and ended up in the belly of a great fish.

I recognize Jonah’s reaction to God’s offer of love and forgiveness. I have responded in a similar manner when confronted with the concept that God is willing to save any and all who come to Him. My frustration increases when I realize that God will involve me in bringing the message of His offer of salvation to my enemies.

This morning I heard a message in a Series about loving enemies. Haven Today featured a man planning to meet next month with ISIS leaders, to bring them the message of God’s forgiveness. As this radio segment was progressing, I shouted out in my car, “Why?” Why would anyone go to ISIS leaders and present to them the love of the living God!?

A few years ago my husband and I traveled to India with a young man named Josh. Earlier this summer we received a letter from him stating that he plans to “move to the Middle East” to share the good news of Jesus Christ with Muslims. My reaction to his announcement was, and still is, “Why?” Why possibly sacrifice your life for people who are clearly serving our enemy Satan?

In light of the daily news of Islamic cruelty, I am struggling to put off my Jonah-reaction. I do not want to end up “in the belly of a big fish”…I don’t want to say “No” to God. I am willing to have my heart changed on this matter. But it must be a supernatural change, because my natural inclination is to see these people cut out of the world community and starved off the face of this earth!

My willingness for a change of heart is due to my own realization that I too was once His enemy. I thank God daily that He sent someone to tell me of His love and forgiveness!

The purpose of this blog is to encourage Christ-folllowers to see God’s Big picture and be a part of it.