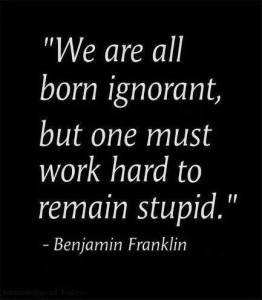 According to Websters, “Stupid” is an adjective defined as, “not intelligent; having or showing a lack of ability to learn and understand things; not sensible or logical”…basically, it sucks to be stupid!

This week Senate Democrats released a CIA moral-behavior report card, attempting to intimidate and end reliable forms of information-collecting by our Central Intelligence Agency. No longer able to access new knowledge without the threat of prosecution, our CIA will be left with fewer options to obtain actionable information to achieve our security goals.

For years Conservatives have accused Liberals of  intentionally “dumbing down” our society through public education. Even when citizens rise up, in the worst districts in this nation, to demand a higher standard of knowledge, Liberals refuse to cooperate, crushing these information gathering attempts that most families want for their children. The result?…those who don’t learn get hammered when they try to survive in the real world.

Our Intelligence Agencies are being hammered too. That same liberal mentality, that justifies the release of an inflammatory CIA report, results in the intentional dumbing down of our national security. To avoid liability, our intelligence agencies must limp along, too crippled to function efficiently, always second guessing, and fearing reprisals at any time. The result?…our nation will be more vulnerable to homeland attacks, and less able to assist our friends abroad. It won’t be long until we as a nation can no longer survive in the real world!

Diane Feinstein revealed to Wolf Blitzer, in an interview Tuesday on CNN, that she felt this report needed to be released now because her Party was losing power in January, and she was sure that the Republicans would not do this dirty work.

Got it! Democrats hate intelligence. They cultivate an atmosphere of stupidity for all of us, and our National Security Agencies. Oh, but don’t ever forget that these same Liberal rulers who deny us information, keeping us stupid, are helping themselves to our personal data, gathering every one of our electronic histories. What is accomplished by gathering this information?…only the possibility of future government intimidation and intrusion.

Amazing, isn’t it?…that the same government that claims to be offended by collecting knowledge meant to keep us safe, is also willing to collect our information to use as a weapon to keep us stupid.

The purpose of this blog is to encourage Christ-followers to see God’s Big Picture and be a part of it.