When Life is Measured in Weeks 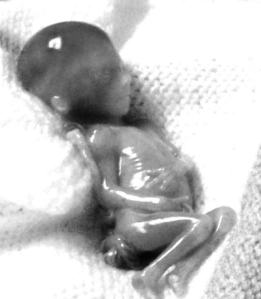 Last Saturday morning saw a nationwide protest of Planned Parenthood. My sixteen year old daughter and I were at the Grand Rapid’s clinic early. The crowds grew steadily, and by 11 AM there were a thousand people filling the public areas in front and across from the main entrance to our local PP abortuary.

The morning was filled with prayer, singing, and serious conversations about abortion and life. Respectful voices were muted in reverence for the thousands of babies that have been sacrificed inside of that Planned Parenthood facility over many years.

On our drive home I received a text, and a photo, from my daughter-in-law. Friends had lost their baby to a miscarriage the day before. The parents wanted to share images of their son Job with those who would understand, as they do, that though their child’s life here on earth was measured in weeks, it was meaningful and deserving of respect.

Last Friday little Job couldn’t hang on any longer, and he was born, too early to survive outside of his mother’s womb. Job’s newborn photo clearly reveals a fully formed baby boy. His body is complete, just not ready for the outside world. Sadly, on that same day thousands of women in the US chose to allow abortionists to surgically remove babies from the wombs where they were meant to remain until ready for birth.

Millions of unborn children have died as a matter of “choice” in abortion clinics across the country. These outrageous deaths are made even worse by the disgraceful dismemberment and sales of body parts, most often done on children near the same gestative age as Job.

Job’s earthly life lasted just weeks, but it mattered…to his parents and to God. Just as all aborted babies, many desecrated by “tissue procurement,” also matter, to those who respect life, and the Creator of it.

“Children are a heritage from the Lord, the fruit of the womb a reward.” (Psalm 127:3/ESV)

This entry was posted in abortion and tagged abortion, life, miscarriage, Planned Parenthood. Bookmark the permalink.

1 Response to When Life is Measured in Weeks